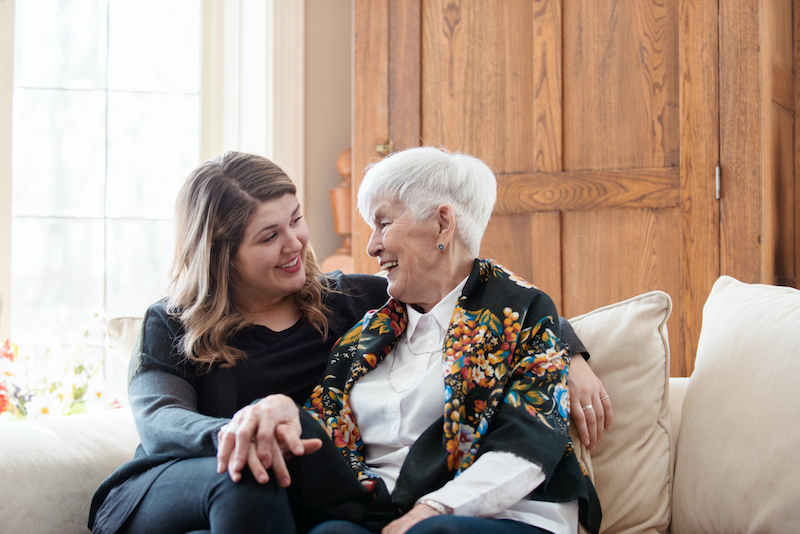 The word “conversation” is defined as “a talk between two or more people in which news and ideas are exchanged.” According to Lea Ann Coates, Residency Counselor at Bethesda Hawthorne Place, having a conversation with a senior parent about assisted living should involve an exchange that brings mutual agreement.

“No one wants to be told what to do,” Lea Ann says. “Your parent will want to be a part of the decision-making process. If this doesn’t happen, you may find Mom or Dad ‘digging in their heels’ when it comes to planning for the future.”

According to Lea Ann, it is important to talk to the parent about assisted living before it becomes necessary. “You don’t want to be making a decision when your parent isn’t feeling well, because she or he may not be as open to it at that time,” she says. “Struggling with an illness or injury, plus the details of a move into an assisted living apartment, may be too much for them to deal with.”

Beginning the conversation early allows time for the parent to think about what they want. Ask them what type of community they would want to live in and what support they think they would need if they were no longer able to live in their home safely. “If you wait until it is a crisis situation, it is difficult to make good decisions,” Lea Ann says.

Suggest to the parent that information could be gathered to find the kind of community the senior would like. This approach is better than the adult child researching assisted living and then presenting brochures. “You want them involved up front,” Lea Ann says. “Otherwise, they may feel you have gone behind their back.”

When seniors leave a home they have lived in for many years, they are leaving a place of memories and exchanging it for a place where they have no history. Also, they may fear losing their independence as well.

These concerns should not be disregarded in conversations about assisted living. Listen to what your loved one is saying and focus on what he or she will be gaining rather than what they will be losing by moving into assisted living.

What Assisted Living Can Provide

If your senior loved one refuses assisted living, they may not realize the many positives about assisted living. In the role of the primary family caregiver, a son or daughter may be so consumed with providing the support that the parent/child relationship gets lost. “Rather than child to parent, the dynamic has become caregiver to client,” Lea Ann says. “With those responsibilities removed, parent and child can regain and enjoy the relationship.”

Also, a senior parent may not realize how much help they are receiving from family members at home. A caregiver can discuss the effort and schedule-juggling requirements to support the parent while trying to maintain a home and care for a family.

Seniors entering assisted living can have more, not less, independence, because many of the responsibilities and challenges they face living in their home will lessen as they are supported by staff.

If Your Parent Refuses Assisted Living, Have More Than One Conversation

“You want to give the senior as much control as possible,” Lea Ann says. That means you cannot expect a single conversation to result in full agreement. She refers to the process as, “opening the door in small increments.”

Also, if a conversation becomes too tense or contentious, back away and bring it up at another time.

Always make the welfare of the senior a focus of the conversations. Lea Ann cites the following as examples: “Dad, I want you to be happy,” or “Mom, I worry about you. I would really like you to be in a safe place where professional help is immediately available 24/7.” This latter statement makes the decision to consider assisted living mutually beneficial; the parent receives the security of assisted living and the adult child receives peace of mind.

One other concern regarding staying in the home is that the senior may fall and become disabled to the point they no longer qualify for assisted living and have to go into skilled nursing.

When the Answer is Still No

The parent may say no despite your best efforts. At this point, Lea Ann suggests talking about consequences. “You say, ‘I know you don’t want to move, but here is what happens or could potentially happen if you stay in your home. And here is the support you would receive if you choose to move into assisted living.”

“We can do our best to persuade the senior as to how they would benefit from assisted living,” Lea Ann says. “Ultimately, the senior is an adult, and if competent to make his or her own decision, cannot be forced to make a move if unwilling.”

Bethesda’s assisted living communities offer all of the comforts of home, with the added security of 24-hour care. Schedule a tour at a community near you.

Finding the right care and support options for a senior loved one can be challenging. Part of the challenge may stem from the fact… Read More

Avoid These Missteps When Choosing an Assisted Living Community

As senior loved ones age, emotionally difficult decisions have to be made about their future care. After all, these seniors are losing some control… Read More