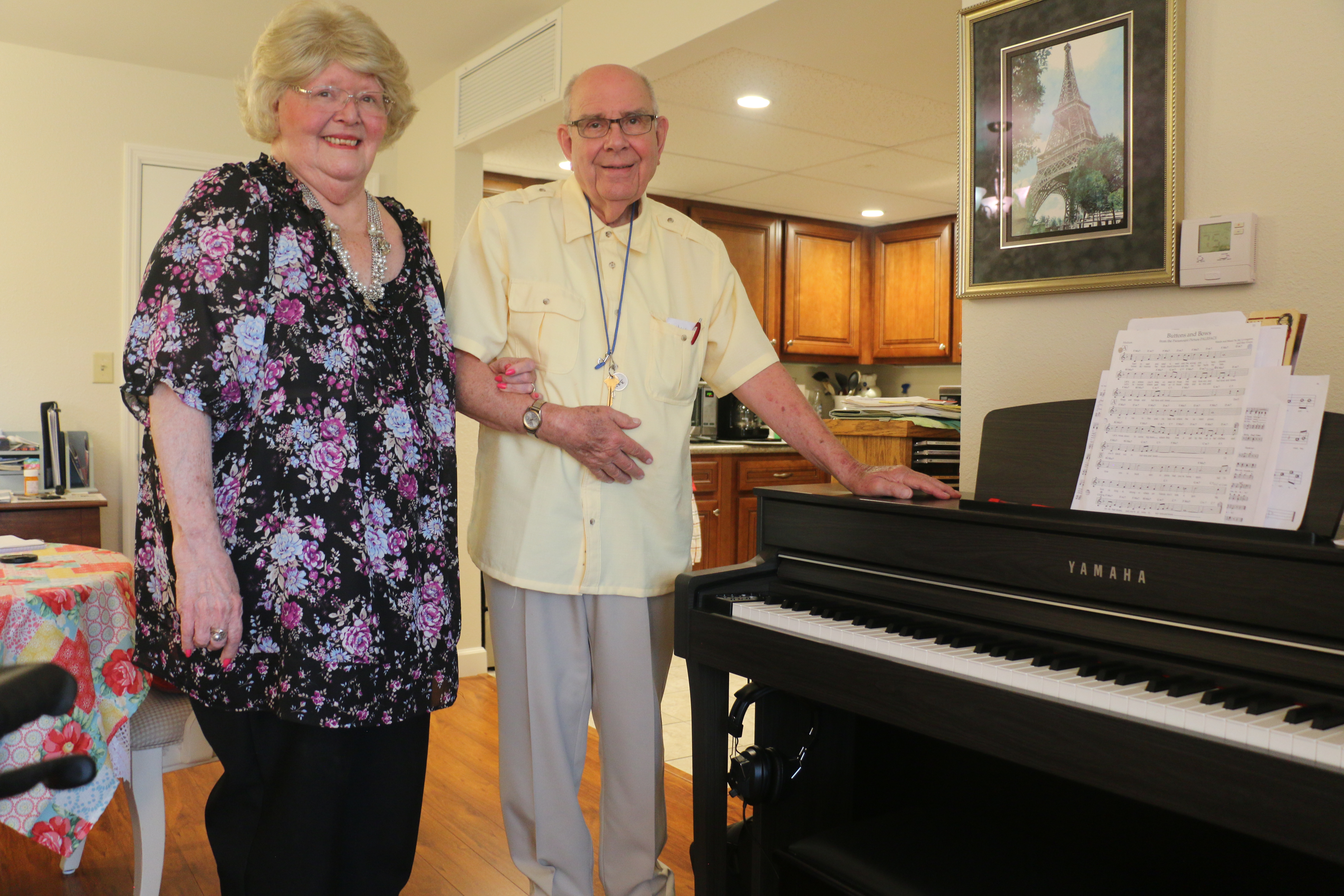 People are drawn to beautiful harmony in music. Jim Thielker and his wife, Judy, have found harmony in their life for nearly 62 years.

Jim, age 84, and Judy, 81, are residents at Bethesda Terrace, an independent retirement living community in South St. Louis, MO. They met in church as teenagers, when he was 16 and she 13. “I was too young to date,” Judy recalls. “But I wasn’t too young to ride on a hay wagon with Jim on a church outing he asked me to go to.”

A few years later, they both attended Roosevelt High School in St. Louis together and began dating. From the beginning, Judy, who was a singer, fell in love with Jim’s ability to play the organ and piano. “He could play in any key, and didn’t even need a sheet of music in front of him,” she says.

Jim also found Judy very attractive, and it was important to both of them that they shared their Christian faith in the Lutheran Church Missouri Synod.

After Jim’s discharge from the Army, they were married in 1957. They have since added a chorus of three children, eight grandchildren, and three great-grandchildren.

Jim worked for the Missouri Pacific Railroad for 42 years until his retirement in 1996. He served as a music minister in local churches during that time, sometimes logging 80 hours of work a week between the two jobs. Today, he is a minister of music at Glendale Lutheran Church.

As they aged, their four-bedroom house became too much for them. “The doctor told me I shouldn’t be cutting grass or shoveling snow,” says Jim. Judy, who suffers from arthritis, was finding it increasingly difficult to cook and clean. Walking up and down the basement steps to do laundry was becoming hazardous, as she had fallen several times. Her youngest daughter, Susan, helped with the laundry. Jim tried, but his knees painfully reminded him that stairs were not good for him either.

After some research, Susan found Bethesda Terrace. Jim and Judy met with Marie Bartels, the Sales Counselor at the independent living community, on Feb. 1, 2019, and immediately loved the place.

Jim was ready to move. Judy, thinking of all the memories and treasures accumulated for 62 years, was overwhelmed with the thought of moving. “It wasn’t a difficult decision for him, but it was for me,” she says. Still they managed to move into their apartment on Feb. 21. “I don’t know how many truckloads of stuff we took out of our house,” laughs Jim.

Each, in their own way, has made a concerted effort to become part of the community at Bethesda Terrace.

Judy immediately made it her mission to introduce herself and learn the first name of everyone she met. “The next time I saw them they were amazed when I could call them by name,” she says. Jim purchased an electric keyboard on casters and wheeled it onto the elevator from their third-floor apartment. He regularly performs hymns, show tunes and Big Band songs in the activity center on the first floor.

They have quickly formed friendships, playing pinochle and going on planned outings with their fellow Bethesda Terrace residents. Much to her relief, Judy doesn’t have to cook, clean, or do laundry. Jim prepares breakfast, and then they enjoy their other two meals in the dining hall. His aching knees no longer ache.

“We have a deal when we leave the apartment,” Jim says. “Judy walks as far as she can without her rolling walker, then she sits on it and I push her the rest of the way to wherever we’re going.”

The ease and convenience of it all impresses Judy. “Everything is right here,” says Judy. “Like today, I had a manicure and went to physical therapy, right here in this building.”

Judy and Jim say they have met some amazing people. Judy marvels at a 90-year-old resident named Arlou Christ, who is a part of an over-80 age group Judy has joined. “She’s a great pinochle player, and the liveliest and most vivacious person you could ever hope to meet,” Judy says.

Jim marvels at the maintenance man Enis Tutundzic: “He knows how to do just about everything,” he says. Both Jim and Judy say that Enis’ wife, Emina, who cleans their apartment is “such a sweet lady.” In addition, the Thielkers have found all the staff to be courteous, kind, and focused on providing great care and service.

By becoming members of an independent living community Jim and Judy have joined others living at a more relaxed tempo. They have freed themselves from many of their concerns and physical challenges, and they have enriched the composition of their lives with new friends and experiences.

Judy sometimes reflects on parting with items that were special during the move. Jim says, “We’ve still got everything that’s special.”

If you’re considering Independent Retirement Living in St. Louis, schedule a tour at a Bethesda community near you. During your tour, you’ll learn more about the various activities and amenities available to our residents. Contact us today to schedule your tour.

Expectation vs. Reality: Living in a Retirement Community

Moving from a home that you have lived in for decades, full of memories and familiar in its every detail, can challenge anyone’s ability… Read More

The Basics of Senior Living and Care Communities

If you’re exploring the possibility of a senior living community or long-term care for yourself or a loved one, you’ll soon find there’s a… Read More

Retirement Living: Women and Men Do It Very Differently

Retirement living means a clean slate and free days, but what will you do with yourself? The answer depends, in large part, on whether… Read More