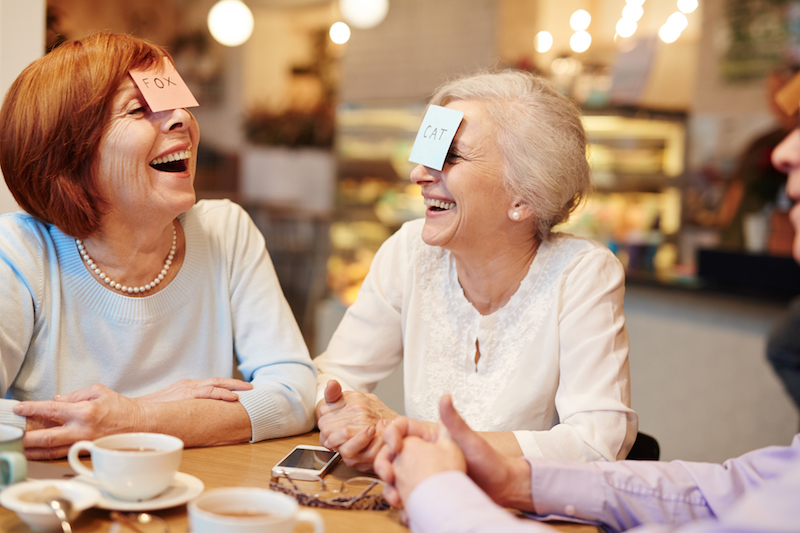 People have been playing games for thousands of years. And why not? Games make us feel like we are mastering something, and allow us control over our choices within the game. If we win, we are rewarded with a healthy dose of self-esteem.

For senior adults, however, there is another valuable component of game playing — interacting with people fends off the feelings of isolation and depression prevalent among many seniors.

Danielle Kozemczak, Activity Director at Bethesda Dilworth, has witnessed firsthand the positive effects of games. “The big benefit is socialization,” she says. “Even if the game-playing capability of a resident is limited, participation can still bring joy and a sense of belonging. We had a resident with Parkinson’s disease who was very limited in his movements and had difficulty speaking. However, he could still shake a Yahtzee cup and roll out the dice. He just enjoyed being part of the game. When he would roll a winning Yahtzee number, we would cheer him and he became very excited about it. It was one of the few group activities he could participate in.”

What Game Shall We Play?

Like many skilled nursing communities, Bethesda Dilworth offers both physical and mental games. One favorite to get residents moving is balloon volleyball, with residents batting a balloon around a room. There is also beanbag toss and a modified bowling game.

Danielle credits physical games with enhanced fall prevention, as its participants build strength and improve their balance during play. “Fall prevention is very important for seniors because a fall can start a significant decline in physical and emotional health,” she says.

Rummikub, a game like Rummy that is played with tiles instead of cards, is gaining in popularity at Dilworth. “It’s a logic game,” says Danielle. “It’s a workout for your brain that keeps you sharper.”

Other popular games with Bethesda Dilworth residents include card games like blackjack, poker, and Uno, as well as a board game version of Jeopardy. Hangman is also a favorite. “A lot of these games exercise attention span, which is key to slowing down mental decline,” says Danielle. “And while they are playing they are reminiscing, telling stories, and laughing together.”

In fact, Danielle has learned some games from the residents, including Rummikub and poker. She has also discovered that people retain cognitive skills specific to games they played when they were younger. “We had a woman who had played Yahtzee for years,” she says. “Even though she had declined cognitively, she still knew how to play, which required math and logic skills.”

What Do They Win?

Game-playing reduces stress and has improved physical health with lower blood pressure and a strengthened immune system. Seniors who are engaged with others eat more nutritious food than those who are isolated and depressed. An enhanced sense of purpose and belonging makes them feel as if they make a difference. Their focus shifts from what they can no longer do or problems they have, to what they are still capable of enjoying.

Social circles that were narrowing with age expand again, particularly in assisted living and long-term care communities, where games make it easier to meet people and make new friends over a game.

In her work as the chief nursing officer for Anne Arundel Medical Center in Annapolis, MD, Barbara Jacobs recently found herself dodging a lot… Read More

The practice of prescribing social activities, or “social prescriptions,” as an alternative or complement to medication for a variety of ailments has become more… Read More

Signs that Your Loved One is Ready for Assisted Living Care

When caring for seniors, it’s always advisable to avoid surprises and sudden changes whenever possible. That’s why it’s important to anticipate the signs that… Read More