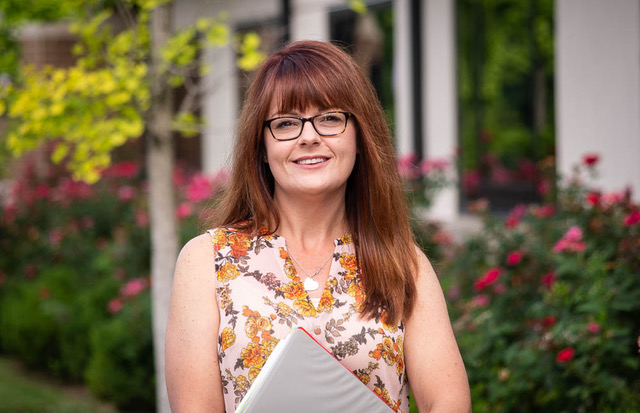 However, Jen’s story began in 2000 when, at age 23, she began her employment as a social worker at Bethesda Dilworth. She coordinated the care of the residents and helped create the most homelike atmosphere possible for them. She conducted depression evaluations and helped new arrivals acclimate themselves to the Bethesda Dilworth environment.

Over time, she was named the director of the department, but Jen wanted to do more. This would become a very familiar pattern with Jen.

Benefitting from Bethesda’s tuition reimbursement program, she entered nursing school while still holding a full-time position. In 2010, after four years of juggling school and work, she graduated as an RN and became a nurse manager at Dilworth.

She later transitioned into positions as a field nurse and then Nursing Supervisor at Bethesda Hospice Care, followed by a stint as a referral coordinator for St. Andrews & Bethesda Home Health.

Along the way, she discovered that she enjoyed the environment she had never planned to pursue. She developed a deep attachment to the residents for whom she cared.

“I always get emotional when I talk about our residents,” she says. “Seniors are amazing people. They have so much wisdom and experience. They have seen things that we will never see. To sit down and talk with them about their lives and receive advice from wise 90-year-olds is an amazing experience for me.”

While a nurse manager trainee at Bethesda Dilworth, Jen had lunch with the same resident every day. When Jen earned her RN degree, that resident was in the audience, cheering her on.

As her career progressed, Jen realized a passion for Alzheimer’s care. “It was one of the biggest reasons I decided to become a nurse,” she says. “There are so many things you can do to make their lives better—sometimes just looking at old pictures together or talking with them and living in their moment.”

Jennifer also helped lead the family group for those with loved ones living with Alzheimer’s. “It gave me insight into what those families are dealing with,” she says.

Unexpectedly, Jen found herself as a member of another Bethesda family: her co-workers. “It’s very much a family environment here,” she says. “I’ve met some of my best friends at Bethesda.”

Jennifer notes the devotion to resident care that underscores everything at Bethesda.

“This isn’t an empty promise with us. I see it every day. We provide the best possible care because our residents deserve it.”

Making a Difference for Seniors

Today, she works with an interdisciplinary team at Bethesda Southgate to monitor and assess the care, treatment, and outcomes of residents receiving Medicare, Medicaid or managed care insurance company benefits. “It’s a seven-day look back at everything that was provided to a resident by nurses, therapists, dietitians, and social services,” she says.

Though her schedule won’t allow her to spend as much one-on-one time with residents as she did when she was a social worker, Jen sometimes finds time to join in an activity with the residents. “I love the holidays, particularly when we buddy up with a resident and create a wreath or ornament in competition with other teams.”

She believes at least one reason for her unique career path was due to a desire to have an understanding of what Bethesda offers and be able to explain it to residents and their families. “Because of my experience, I’m able to tell people what we can do for them,” she says.

Twenty years ago, she didn’t see herself in long-term care. Today she remains there due to a passion for residents, respect for her co-workers, and Bethesda’s dedication to care.  She has made the most of many opportunities, created some of her own, gained valuable experience, established deep relationships, and formed lasting memories along the way.

Start Your Career at Bethesda

Here at Bethesda, we are always looking for enthusiastic people who are ready to dedicate their career to improving the lives of others. To explore open opportunities at Bethesda, which was named among the “Best Places to Work in St. Louis” for of the last seven years,  visit our Careers page or contact us for more information.

8 Frightfully Fun Halloween Treats & Activities for Seniors and Their Families

Preparing easy-to-make Halloween goodies is a great way for families to spend time with loved ones of all ages, and provide activities for seniors… Read More

Veterans have risked their lives serving our country, and we believe it’s never too late to give them a “hero’s welcome home” or acknowledge… Read More

A couple of years ago, several young men in their early 20s snuck quick peeks over to the opposite end of the gym during… Read More