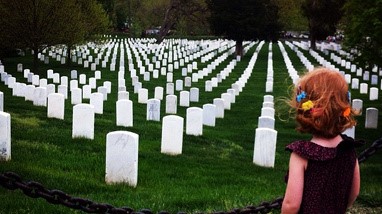 “Day is done, gone the sun, from the lake, from the hill, from the sky. All is well. Safely rest. God is nigh.” — Taps

A soldier is buried. Echoing across the cemetery is the plaintively haunting sound of “Taps,” the final bugle call that signals the end of a serviceman’s day. Someone from the same branch of the military as the deceased hands a crisply folded American flag to the next of kin, then salutes. Every person who has ever served in the U.S. armed forces or in the military of U.S. wartime allies and died during active duty or was honorably discharged is eligible for this final show of respect.

One of my biggest regrets, something that still twists my insides a little whenever I think of it, is that we didn’t give my father a military funeral. “Taps” was not played, a flag was not tendered, a salute not given when Marvin Rosenblum was laid to rest at Cedar Park Cemetery in Paramus, N.J.

A Soldier to the Core

Dad was a captain in the Army during World War II. I always had the feeling that his years as a soldier were the happiest of his life. The military suited his sense of order and his code of loyalty. He had wanted to become a career officer, but my mother was not cut out to be a military wife. So Dad joined his father-in-law’s business and spent the rest of his days working for my difficult grandfather selling sewing thread to clothing manufacturers in the South.

To my knowledge, Dad never kept up with his Army buddies or joined the American Legion; he didn’t take advantage of the G.I. bill or other veterans’ benefits. But he avidly read and reread novels about World War II. Mom and I used to joke that any book with a swastika on the cover would be a perfect gift for my father.

Neither of my parents had planned for their deaths. My mother, a Christian Scientist, didn’t believe in death. Dad was much more fatalistic. Living with emphysema, the result of many years of smoking, he just assumed he would die prematurely and preferred not to dwell on it.

So when Dad died of heart failure at 72, we were unprepared in every way. Mom phoned me at midnight from an emergency room in New York City. She was screaming: “He’s dead! He’s dead! I never said goodbye, they wouldn’t let me in!” The medical staff that tried to resuscitate him did not allow her in the room.

I didn’t think I could handle anything that night, so I asked my husband to go to New York while I stayed home in New Jersey with our children. But after I took the kids to school the next morning, I jumped on a bus to New York in the pouring rain. When I got to my mother’s apartment, she was in a state of fury as well as grief. “You sent him,” she said of my husband. “You couldn’t be bothered to come in.” We were still arguing when we arrived at the Riverside Funeral Home on Amsterdam Avenue.

Once inside, however, everything changed, and we were crying and holding each other. The funeral director, with appropriate professional gloominess, went over the details. We chose a coffin and flowers and made a million split-second decisions. But the funeral director never asked if Dad had served in the military, and it didn’t occur to either of us to mention it.

Because Mom was a Christian Scientist and Dad never went to synagogue, we didn’t have a rabbi, so we hired one recommended by the funeral home. My mother told him she wanted to speak at the funeral, to tell all her friends how “everyone underestimated Marvin — no one appreciated him.” She sounded angry.

The rabbi and I exchanged looks. “Sometimes,” he said, “it’s better when someone who isn’t as emotionally involved does the service. You tell me what you want me to say about your husband and father, and I promise I will speak for you.”

The service went well, the rabbi did what he had promised, and my husband gave a warm and loving eulogy. Mom and I were practically catatonic in the front row. From there we proceeded to the cemetery, where my father was buried in my mother’s family plot alongside his mother-in-law. We shoveled dirt on the coffin and heard the thud. There was no “Taps,” no flag, no salute.

I didn’t learn about the possibility of having those military honors until many years later, at the burial of an older cousin who was also a World War II veteran. An honor guard of two young soldiers arrived, straight and proud. Since live buglers are rare these days, they had a CD player, which played a tinny version of “Taps.” It was a nice ritual, even though my cousin’s Army service had been 50 years before. “Dad would have liked that,” I thought. That was the first time I felt the pang of regret, representing everything I didn’t do for him before he died or after.

Last spring, my husband and I took our 2½-year-old granddaughter Emma, pictured above, to Arlington National Cemetery. Hundreds of thousands of identical white posts stand in neat rows on the hillside, marking the mortal remains of service members from the Civil War to Afghanistan. Emma ran along the walkways that warm day, with no understanding of the purpose of this austere landscape. She kept trying to slip under the chains separating the road from the graves.

Off in the distance, a funeral was taking place, and we heard the first solemn notes of “Taps.” Emma knows the tune from her bedtime ritual. Her mother had learned it at summer camp, and her parents sing it to her at night after they read her a story and sing some lullabies. When Emma heard the familiar notes at Arlington, she stood still. “Bedtime,” she said.

“Yes,” my husband said. “Someone is going to sleep.”

What Could Have Been

Dad could have been buried at a national cemetery. Veterans’ benefits include a gravesite and headstone plus perpetual care, a flag and a presidential memorial certificate, all at no charge. Instead of spending eternity next to his in-laws, he could have been with other soldiers. Did he know about these benefits? There was no Internet in 1992 when he died, no easy way to do research. Today you can Google “military funeral” and find all the necessary information on military.com.

I don’t know if my father would have wanted a formal military burial, but I do know he loved being a soldier. He kept his captain’s dress cap, his campaign medals and his discharge papers neatly in a box in his closet. That day at Arlington, I picked up two small stones from the walkway and tucked them in my pocket. In Jewish cemeteries, visitors leave stones rather than flowers to mark their visit, a vestige of a nomadic past when burials in the desert were done in haste with stone markers.

This year, when I go to Dad’s plot on Veterans Day, I’ll put the stones from our nation’s greatest military cemetery on his grave. And I’ll use my iPhone to play “Taps.” And then, standing alone, I’ll give him a proper salute.

Honoring Veteran Loved Ones: Beyond a Military Funeral

Remember to honor your Veteran loved ones and show them just how special they are. Here at Bethesda, we welcome the opportunity to thank our Veteran residents through programs like our Veteran Escort program and the Greater St. Louis Honor Flight. Each year, we celebrate Veterans Day with our residents and their families.

By Wendy Schuman for Next Avenue

This article was previously published in May 2013.

Caring for Senior Veterans: How to Manage PTSD

In the American Civil War, soldiers exhibited a set of symptoms that included shortness of breath, palpitations, sweating, and chest pains with no discernible… Read More

Should Experience with Veterans Affect Your Senior Care Decision?

If your senior loved one is a Veteran, you may be looking for a skilled nursing community that is well-versed in caring for Veterans.… Read More

Thanks to a generous $5,000 grant from Omnicare, Inc., each of Bethesda’s independent retirement communities proudly boasts a “Wall of Honor” featuring all of… Read More