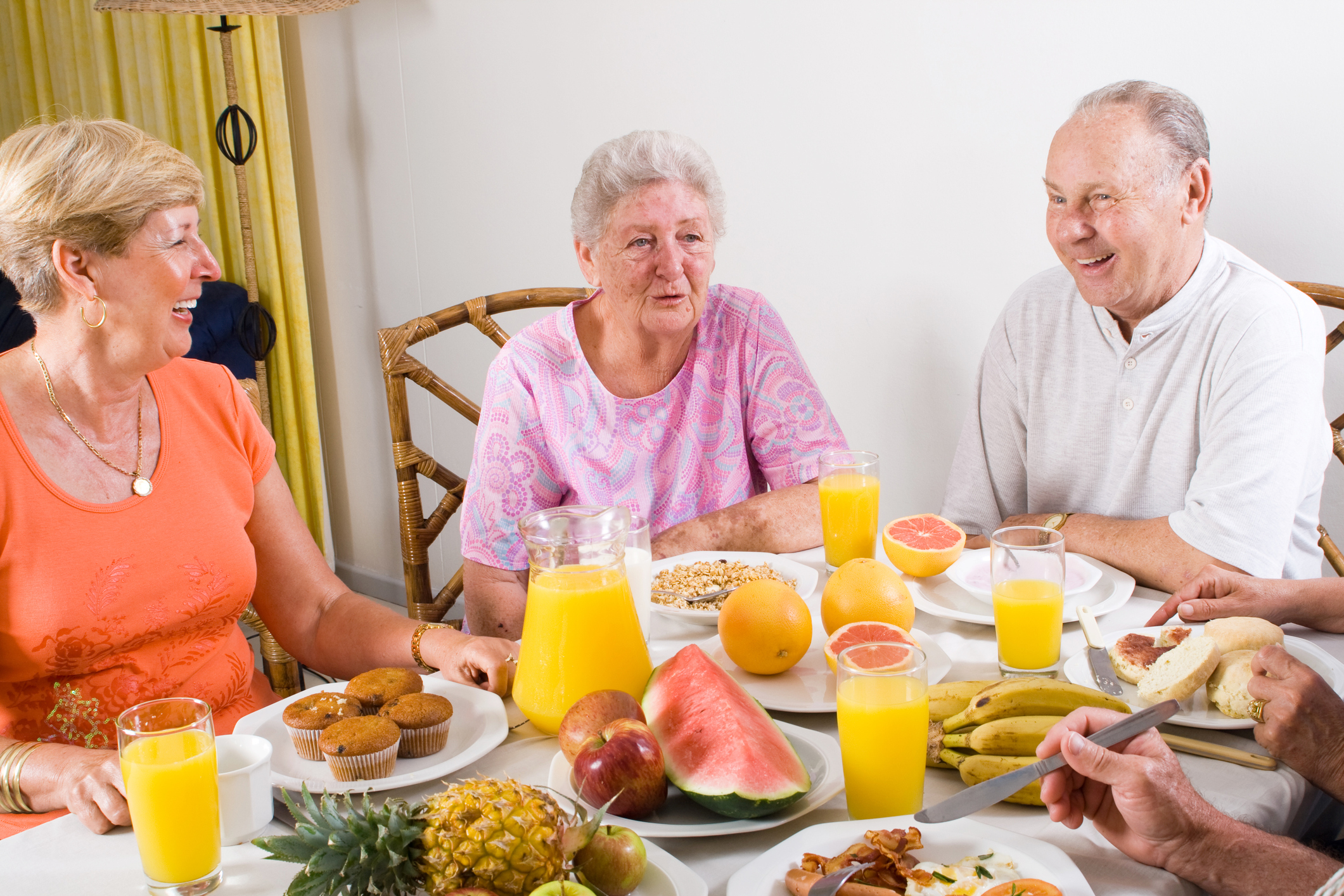 Life is just better with friends.

That’s why a group of Bethesda Terrace residents have a standing date each and every morning in the dining room of their retirement living community, which is located just off Telegraph Road in Oakville. They call themselves “The Breakfast Club,” and on any given day, 10-15 of the group’s “members” can be found seated around several tables pushed together along the edge of the room beneath a picture window.

“We always have great conversations,” said Breakfast Club member Rosemary “Teddi” Ramirez with a smile and then a laugh. “We talk about our families and our activities a lot – plus food is always a big topic –and there are plenty of jokes. Sometimes we get a little bit rowdy. But we can’t help it. We just enjoy each other’s company and have a good time.”

Advantages of residing in an independent retirement living community include the fact that seniors there don’t have to worry about maintenance, security or cooking meals if they don’t want to do so. But one of the best things about independent senior living is that, instead of living alone in a solitary house, residents live among people with common interests and concerns. That makes it a great place for seniors to socialize and meet new friends.

The Bethesda Terrace Breakfast Club starts to assemble each morning at about 7 a.m., and its members get caught up with the latest information – or gossip – over a restaurant-quality meal. They go through their business casually, meandering from one subject to another — and usually break up by about 8:30 a.m. to get on with their day.

Only one topic is off limits from the group’s spirited conversations.

“We used to have some pretty heated conversations about politics,” Teddi said with a chuckle. “So that had to go away. It’s the only thing, really, that we won’t talk about.”

Group member Antoinette Gordon said the Bethesda Terrace servers look out for the members of the group, helping to set up the Breakfast Club’s meeting area and making sure everyone gets their meal cooked just the way they like it.

“They’re so nice to us all,” Antionette said. “There’s not much better than having a good meal with good friends.”

Looking Out for Each Other

Like all close friendships, though, members of the Bethesda Terrace Breakfast Club are there for each other in good times – and in bad. When someone is sick, the odds are that one of their peers has been through something similar before. So the members can talk each other through their issues, offering helpful tips and reassurance.

“We’re all here for each other,” Teddi said. “It’s nice knowing you have a support group when you need it, people you can depend upon.”

Lately one of the most prominent members of the group, Marion Reeve, has been feeling under the weather. Marion, who usually sits at the head of the table, has been sleeping in and has been having her breakfast in her apartment. Though Marion is missed in her absence, the gathering continues on – but Teddi stepped away from the table in the middle of her meal to go to Marion’s apartment to say hello and ask how she was doing. Marion said it wouldn’t be long until she was back at her reserved seat.

“Marion is the leader of the pack,” Breakfast Club member Joan Willhoit said. “When she talks, you can hear a pin drop. We miss her. But we’ll be here waiting when she gets back up to speed.”

The latest person to join the table is Milt Siminich, who mentioned in conversation that he used to work at Monsanto. The revelation grabbed Teddi’s attention, as she worked in the same plant for 20 years. It turns out the pair are long-lost colleagues. She even found a photo of them together at a company event.

The members of the Breakfast Club group have joined one-by-one over time and new faces are always welcome, whether it’s a visiting relative of one of the members or a new resident of Bethesda Terrace eager to make friends.

While it might seem like a pretty exclusive club, getting into the Breakfast Club isn’t difficult. You just have to have one of the members invite you to the table – and you have to be able to hold up your end of the conversation when you get there.

“We don’t take a vote on new members or anything like that,” Teddi said. “All you have to do is find an empty seat. There is no secret password, but we do have a group motto: ‘We’re here to stay.’”

The Greater St. Louis Honor Flight’s mission is to allow as many World War II Veterans who live in our area as possible to… Read More

Howard Watson: Lending a Helping Hand to His Community