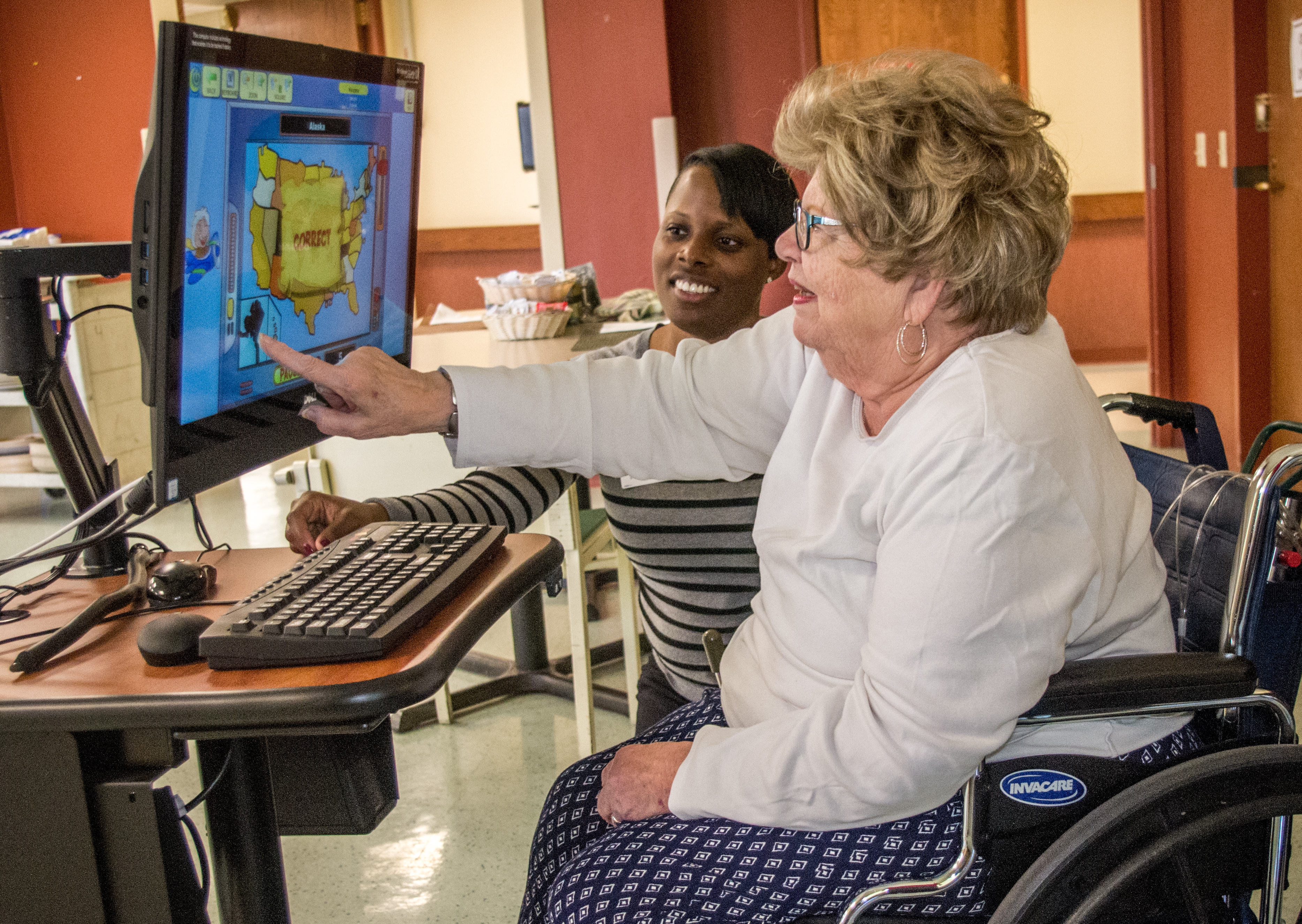 Patricia Stirlen, an 82 year old Bethesda resident, leaned forward in her chair and intently watched a U.S. map on a computer monitor, waiting for the prompt to identify the state being referred to on the screen.

The computer program that had Patricia’s complete attention was designed by a company called “It’s Never 2 Late” (iN2LTM). An interactive computer system for seniors, the iN2L touch-screen displays a content library with multiple offerings to stimulate memory, movement, creativity and fun for users.

Bethesda is one of the few senior living, care and services organizations in the St. Louis area offering the computer system for their residents’ use. Systems are currently available at Bethesda Southgate, Bethesda Hawthorne Place and Bethesda Meadow, the skilled nursing home community where Patricia lives. One is also being purchased for use at Bethesda Dilworth.

Bethesda decided to incorporate the iN2L system because of its proven benefits for residents. “I strongly believe that this program will improve resident satisfaction by offering a more resident-centered program, which in turn will enhance the resident’s quality of life,” says Chris Crouch, RN, Vice President and Senior Administrator at Bethesda Southgate.

“Staff will have a better understanding of the residents’ abilities, preferences, needs and wants,” Chris continued. “This program can offer experiences that will help them develop the skills to be as independent as possible, and participate in their care at the highest level possible for that individual.”

When the system prompted her with a state name, Patricia touched the screen to identify the state’s location. In another offering, the screen appeared as clear water that rippled when Patricia touched it. Curious “fish” then “swam” up to her fingertip. Other stimulating games and visual effects offered include:

Also, through iN2L’s Internet connection, Skype and email with family members can be set up, with pages customized for each resident.

Fun that improves mind and mood

For example, a study by LeadingAge, a national community-based, nonprofit association specializing in aging services, found the following benefits when residents used the system:

Or, as Patricia puts it: “I like it because it makes me think fast and work fast.”

The LeadingAge study also found a 47-percent drop in stress indicators for staff. As caregivers monitor the iN2L program with the residents, they too get caught up in the fun and become cheerleaders.

According to Amy Cohen, an Activities Assistant at Bethesda Meadow, the program has “brought residents out of their shells,” as they enjoy setting personal best scores on various games.

Among the favorite activities is a game that allows residents to pick a category and then guess the cost of an item in that category from decades ago. An example question: How much did a pair of women’s nylon stockings cost in 1948? If you answered a $1.45 like Patricia did, you would be correct.

The “Patricia Review” is in

What would Patricia say to fellow seniors about the program? “Try it! Just try it! You’re gonna love it!”

After a 20-minute session with the iN2L system, she had one question: “Do I get to play again?”

Learn more about the iN2L program and its benefits for senior residents by contacting Bethesda Skilled Nursing.

Your Doctor Will Skype You Now: The Pros & Cons of Telehealth

If you work for a big company, odds are you’ll soon be offered a new health benefit: Telemedicine, sometimes called telehealth. Telehealth It’s the… Read More

7 Gadgets for Seniors Living with Alzheimer’s

In 1906, Dr. Alois Alzheimer publicly reported on the first case of the disease that would bear his name. Even so, most people with… Read More

New Hearing Aid Apps Are Worth a Listen

Maybe you notice that you’re starting to miss words during conversations in noisy restaurants. Or you find yourself reaching for the TV remote more… Read More